Valentin Thurn wrote and directed the 2010 docu-film 'Taste the Waste' which demonstrates the incredible scale of food waste. In the Winter of 2012, Thurn founded 'foodsharing.de', a web-app to help people share their surplus food. 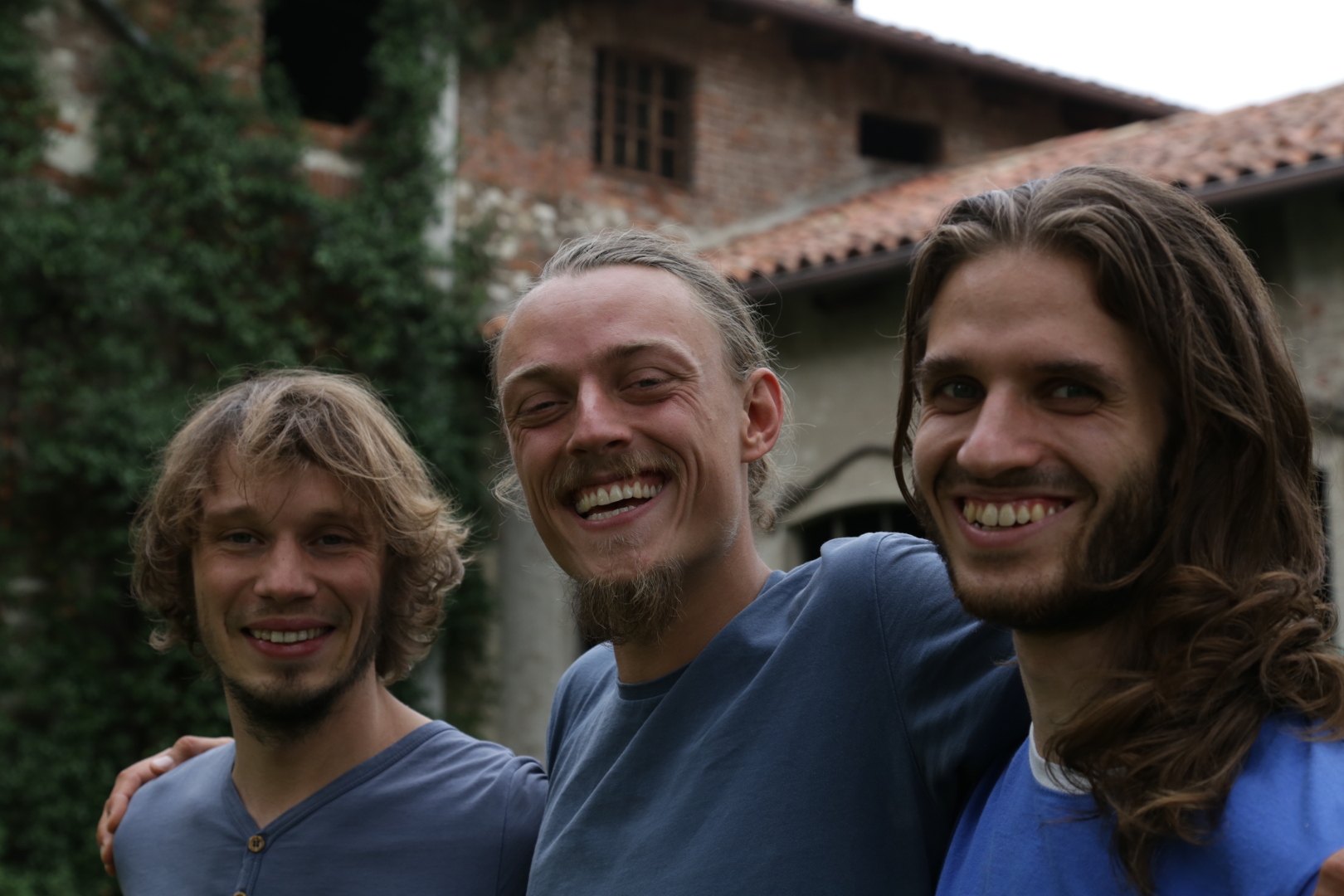 Raphael Fellmer initiated the foodsaving movement 'Lebensmittelretten' in Berlin in 2012 which organized the distribution of food that would have been thrown away by businesses, to individuals. This was arranged through a combination of online maps and spreadsheets which worked, but required a lot of maintenance and had its limits. Fellmer met Raphael Wintrich and both dreamt of a world where everyone could share their skills unconditionally and without money. Wintrich became actively involved, creating a 'quick-and-dirty' web-app for sharing and saving food, originally just for his home town of Köln. This grew into a labour of love with over 2000 hours of full-stack, solo-development until winter of 2012. (Raphael Wintrich, Raphael Fellmer and Martin Schott left to right).

Fellmer realizing that the foodsaving movement was growing ever larger convinced the board of the Foodsharing association (operator of foodsharing.de) of the benefits in collaborating with lebensmittelretten.de. In the winter of 2014 both platforms merged under the name of 'foodsharing.de', using Wintrichs web-app. The movement spread across the German speaking countries (Germany, Switzerland and Austria) with over 100,000 registered users of the web-app and over 3,000,000 kilograms of food saved (as of 2015-01-09). Further information about the current foodsharing.de can be found on Wikipedia.

Fellmer, Wintrich and their friend Martin Schott discussed the possibilities and practicalities of spreading foodsharing globally, then extending the scope of the project beyond just food. It turned out that they weren't the only ones to think that was a good idea and when the call was sent out to start this new project -  yunity - over 200 people applied for the first meeting (WuppDays) in Malo.

The first WuppDays were held in Malo, Italy kindly hosted by Isabella D.B. in her family home. Over 30 attendees met together to set the foundations for the project. The vision and mission of the project were defined and it was decided to recode over refactoring the foodsharing.de code. Read more about it in this blog post.

The second WuppDays were held in Mainz, Germany kindly hosted by the residents of Liebemenschhaus. Over 20 attendees - mostly those from the first WuppDays - attended to continue the work. A super basic demonstration of some webapp features was made and clarification of feature terms was achieved. Read more about it in this blog post.

The third WuppDays were held in Chemnitz, Germany kindly hosted by the residents of HB6. About 10 people attended, mostly active contributors and some people active in foodsharing. A greater understanding of how foodsharing.de and yunity.org relate to each other was achieved and the whole website was revised and translated into Deutsch. Read more about it in this blog post.

The fourth WuppDays were held again in Chemnitz, Germany but this time hosted by the residents of the Kompott. Over thirty people attended including many people new to the project. The first OpenWuppDay was held over the second weekend where many interested people came to get a flavor of the project and meet the team members. A lot of work was done in transferring information onto the wiki and it was the initiation of the Translation Team. Read more about it in this blog post.

The fifth WuppDays were held in Nürnberg thanks to Manuele Carlini, Kirstin Siu, Laura and Pranav Salunke. Over twenty attended, over the course of the two weeks. A lot of work was done with regards to the specification: assessing the current situation, considering where we want to be, etc. A process for online systemic consensus was launched and used to validate the logo. Wordpress was investigated as an alternative to October CMS and incorporation of new contributors was discussed.

Thanks to the hospitality of the Meesteren Foundation and the Pootgebouw housing project, yunity finally manages to leave Germany for the Netherlands. Working alongside United Earth and Noomap was encouraging, inspiring and a lot of fun. The designers and developers began trying yunity Scrum to coordinate the work efforts on the application, the Sharavan side-project was initiated, T-shirts were up-cycled into yuni-T shirts, advances were made into securing permanent WuppSpaces and much, much more.

We were kindly hosted by Seminarhaus am Michaelshof. We have now started the ‘Scrum of Scrums’; a sort of technical blog on our wiki which hopes to provide a window into the current, technical state of the project. Furthermore we created the base for our very first conceptual video, which is already online. Lastly, the video shoot for our yunity-song was performed by the Swing Bohème Orchestra, the lyrics were written by the multitalented Daniel Hughes.

/wiki/spaces/YUN/pages/16842759, joined with the preparation of the undjetzt!? conference. Important decisions took place during that time, e.g. the focus on the Karrot and the idea to restart development on foodsharing.de.

The WuppDays #9 in Kirchheim unter Teck began with the announcement of Raphael Fellmer and Martin Schott to start their own organization, sharecy. yuniteers were also present at the foodsharing festival, the climate camp, the degrowth conference and the new healing festival.

Following an invitation from Tilmann to enjoy saved food and drinks from a commercial music festival, the WuppBreak September 2016 gathered around 30 yuniteers and interested people for over 3 weeks. Dreaming and planning meetings about the yunity Tours took place, a mud oven was designed and built by Joachim Thome and generally the event helped to bound and grow the yunity family.

An intense weekend at the Hackathon Berlin kickstarted the development on foodsharing.de. A self-organized free market in Berlin spread the idea of unconditional sharing to a broader public. Read more about this in the relevant heartbeat.

WuppDays #12 Witzenhausen, first half of November 2016

This time we have been hosted by a Transition Town (TT) initiative. Witzenhausen is little town popular for being the first place in Germany to only/fully study ecological agriculture, which seems to have a great influence. Although the city is small there are many initiatives doing social and commons work. It was a great opportunity to explore and open rooms for transparent communication and to encourage more people to get active. The group of TT is looking for support to build a working team to maintain the house. This includes practical work like repairing broken showers, but also creating a team that is transparent and welcoming in its communication. The place is looking for people willing to contribute.

While at Witzenhausen, we got the offer to take over the old trainstation in Bad Dürrenberg as the very first WuppHaus. People got excited and immediately went there to find out how we could make use of this generous offer of Bernd Rühl. For some months the building was populated with yuniteers and also some locals ready to do some work to fix the house and create a free and open space for people to experience the beauty of unconditional sharing: We had a time so great and productive over Christmas and NYE that we called it WuppDays in retrospect, we held a free market and had workshops and seminars at the cold and roofless house.

Sadly, winter was cold and energy got drained after a while. Fixing a roof, that is completely missing without using money is a pretty difficult task and opinions concerning the scope and sense behind the moneyfree approach differed more and more clearly over time.

While some of us tried to make Bad Dürrenberg work according to their strict morals, others went South to escape winter and experience different perspectives. Read the heartbeat of February 5th to get an overview of the topics of that time.

In March 2017 a group of us gathered in Harzgerode to tackle the deep questions. Read the detailed minutes from this week of philosophical value to understand what we went through to get to this conclusion:

New identity: yunity is a network!

The wh-y-unity meetings concluded with the participants agreeing, that yunity is a network of subprojects and stopped being one project at least half a year ago, when we decided to not further develop the yunity platform (a big multisharing platform, that was the initial idea for yunity) and instead focus our development resources on the foodsaving tool and foodsharing.de.

This realization led to a severe clean-up of the yunity.org website to make it not much more than a collection of links to the subprojects. The idea of general WuppDays is not really relevant anymore in this concept and was replaced by specialized meet-ups of the subprojects. All the issues we had (use of money, use of proprietary software, personal involvement, radicality of approaches) were made issues of the subprojects and not of the complete network: Not everybody has to agree to the solutions of one group. The common denominator for the whole network still is the concept of unconditional sharing, but to which degree it is applied and how strict people want to stick to it is up to the people working together on a specific project.

With this new identity nothing stopped the people anymore, who were interested in buying houses in Wurzen to make them into a WuppHouse. (Due to the controversy in the beginning, they later decided on a different name though.). The process of actually getting started still took quite some time, so that six months passed from the first tour of the houses in January to the actual moving in in July. Homepage coming soon, for now check out the wikispace. Regular updates are also included in the heartbeats, starting from the controversy in January to the actual house-related news in July to what people are up to inside the houses.

Another hackathon was held by the people involved in foodsaving tool and foodsharing.de programming. For a more productive atmosphere and possible synergies the team of trustroots.org joined in as well. Read the invitation here and the corresponding retrospective heartbeat here.

To the extent possible under law, the yunity wiki contributors have waived all copyright and related or neighboring rights to the content of the yunity wiki. More information...

You have an account but can't edit or create pages? Write us in the open chatroom or in our yunity Slack!